So in the lovely in beautiful New York where I spend 85% of my time, it is totally legal for a female-breast-possessing individual to go topless in public.

Yup! Totally legal! Bet you didn’t know that. Well I certainly didn’t, but recently its been getting quite a bit of press – despite the fact that it has been legal since 1992.

You can read some articles about everyday ladies and their everyday topless lives, or you can be like me and do the deed yourself!

So…this past weekend at the Gay Pride Parade I bought me some delicious gold star pasties, glued them to my mammaries and strutted about!

Maybe the Pride Parade isn’t exactly the bravest place to go topless – seeing as there are many other half naked folks and most everyone is pretty open and non-judgmental and seeing as I was also not completely topless due to my pasties – but come on, it was my first time going half naked in public! Baby steps, people.

It was fantastic. For one thing, being topless feels amazing. I understand why male bodied folk like to go shirtless in the summer. It was scalding hot in the city that day but the breeze on my chest felt refreshing.

Usually I couldn’t care less what people think of me (their damage ain’t my damage) but I was hyper-sensitive to any signs of disapproval, especially with so many cops around because, lets face it, the NYPD doesn’t have a great reputation and many women are still harassed for being topless by cops who didn’t pay attention during training.

I only got really one perceivable sign of disapproval: from a fireman in the parade. But really, who cares! The positive responses far out numbered the negative ones. 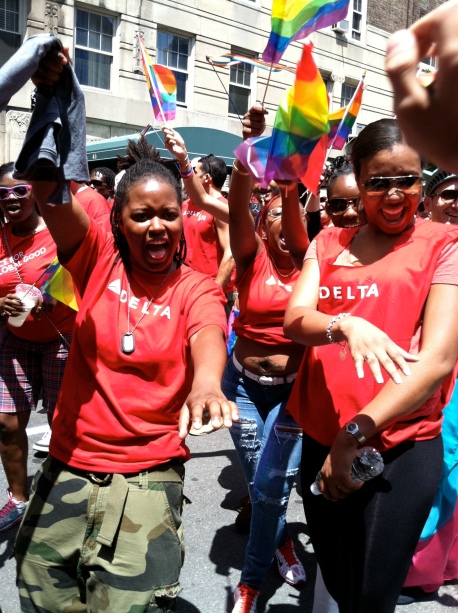 Tons of people in the parade wanted to take pictures with me (and my girlfriend, who was not fully topless) and gave me high fives or thumbs up. Lots of cheering in my direction.

One guy even said to me:

Don’t ever let a straight guy tell you you’re not beautiful, because you are, you are beautiful.

(Which, you know is problematic because he assumed that I was straight) But also very very sweet and made me smile!

Overall grade of my topless experience: A+

Even though pastie glue is a bitch to get off.

A blog dedicated to all things Queer, feminist, and sex positive. And also food, sarcasm, and tattoos.

Error: Twitter did not respond. Please wait a few minutes and refresh this page.